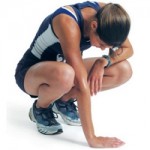 This weekend I participated in a half marathon race. Of all the half marathons I completed, this was the hardest. The weather turned from a nice cloud cover to a heat advisory all weekend. Race directors even offered vans to escort runners to the finish line because of the anticipated number of dropouts. Ambulances raced to the course for those suffering from heat exhaustion and finish times increased exponentially.

I finished in my worst time ever. I almost stopped to take a break–something I’ve never done in a race, ever. I could barely walk at mile 12, when the course turned into a hill that kept going for the last mile. The heat really got to me. Here are a few other moments when races did not go as intended:

In 2008, I ran a half marathon in the desert of Arizona. Police officers directed runners to keep running on a road, rather than turn to a trail, which was the actual course. We all ran an additional two miles off course. Once we figured out what happened, runners were running over hills, jumping over a wire fence, anything to get back on the proper course.

In 2006, I did a half marathon in which the buses didn’t show. We had to wait for an hour and a half for a bus to pick us up. This meant I started the race super late after the official start. I had to run in between the walkers and try to jump around people.

In 2010, in a holiday 12K, the police officers were all new to directing traffic for races. They thought they were supposed to stop the runners and let cars pass. Therefore, they held up large groups of runners to let cars go. The race directors were not happy and apologized at least.

In 2011, I was doing my first ultramarathon through trails. I got lost and couldn’t figure out which way to turn when I came to a fork in the trail. I made the wrong choice and ran an extra mile.

What are some of your race fails?