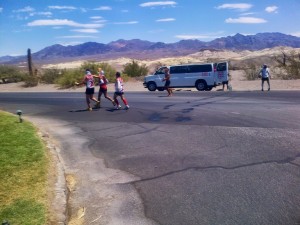 This past weekend, I had the privilege (cough, cough, ahem, ahem) of crewing Pam Reed to the finish line of the Badwater Ultramarathon.

What is the Badwater Ultramarathon? Badwater is billed as the toughest foot race in the world–a 135-mile foot race through Death Valley in July, then up 8,500 feet of Mt. Whitney–the tallest mountain the lower 48 states. I was unaware of that geographical fact when I said yes to this extreme task.

Pam Reed at the finish line

Not only did the crew team deal with horrific conditions–122 degree F temperatures, 30 mile per hour winds of hot air, blowing sand–but we were supporting one of the fastest ultra marathoners on the planet: Pam Reed. Having one this race previously, Pam deals well with heat, climbs and extreme conditions. Her minuscule body is actually quite powerful and tough.

In 2013, she placed second among the females and was the first American female to cross the finish line.

For each mile of all 135 miles, we prepared her food, jumping out of the car to fix small turkey sandwiches, mix drinks of juice and club soda cocktails, rub her legs, provide cold water for her to dump in her hat, prepare socks full of ice so she could tie them around her neck, and then traded off crew team members to run behind her and spray her down with garden hoses from a hardware store.

I tried to battle the heat and epically failed. After my first .5 miles, I stopped. I then joined again after an additional .5 miles and felt so sick in every organ of my body. I covered up my mouth, neck and eyes, but the brutal heat left me nauseous. And given we were running with one of the fastest women out on the course, I just plain couldn’t keep up.

Luckily, that night and early the next morning, temperatures dropped and I could put in a total of six miles with her, spaced out over several hours.

I felt embarrassed by my lack of ability to keep up when she’d been running for hours and hours with no break. I ran .5 miles and couldn’t even keep up.

Pam finished in a little more than 30.5 hours with no break. I’d need sleep.