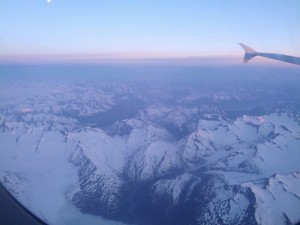 Raised in Seattle, my friends always headed north to Alaska to work in the fisheries every summer. Even my dad and brothers would fish along its coast for father/son vacations… yet I never visited–until this weekend. Naturally I made a running trip out of it.

Every year, nearest the summer solstice, the Mayor’s Marathon and Half Marathon are held with participants from across the world and all 50 states.

I flew into Anchorage, landing at midnight. The photo above was taken just before 12 a.m. and easily displays the famous “midnight sun.” Children played in the streets after 11 p.m. each night and downtown held a Summer Solstice Festival–making it the perfect weekend for a race.

Here are a few pointers to the Mayor’s Midnight Sun Marathon and Half Marathon that I didn’t receive and wish I knew:

Bring bug spray. Most of the course traverses through back woods and not along typical city streets. I quickly learned that mosquitos in Alaska are no joke. Even “Off” bug spray is no quick defense. Rather, ask the locals what works and head out to the grocery store to purchase a can before race day. Every runner spent part of the race just swatting bugs. One girl had at least 20 bugs on the back of her head. My neck turned red with bites and mosquito guts encased my hands.

You hike. Approximately a mile of the course is literally into the woods–not along concrete trails. You run along bulldozed grass and battle the bugs along the way.

The scenic course. I felt grateful for carrying my cell phone with me as I could snap photos of the looming mountains still a bit covered by snow, the ice waters next to Anchorage, the cranes sitting in the marsh land and moose simply roaming free. Alaska really is the “Last Frontier” as you see on all the license plates. It’s truly a place where animals and people just live in harmony and share land equally.

The coldness. As someone coming from a hot state, the 50-degree temperatures waiting for me up north were plenty shocking to the system. During the race, the weather turned warm with plenty of sunshine. However, it soured quickly. Be prepared for changes in temps throughout the race.

I finally fulfilled my dream of visiting Alaska and recommend this race, although don’t expect a PR–be prepared for a challenge.