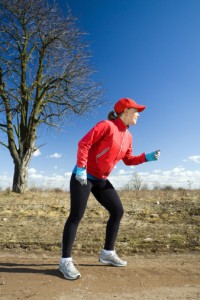 Where I live, a heat wave blasted us with extreme temperatures to the point I called quits on my long run this weekend. My schedule called for 14 miles and I cut it short by four miles–even struggling for the 10 I did complete. But in two days, the forecasters call for rain. I love autumn, but the weather often becomes unpredictable and ranges from extreme hot and cold. Here are a few solutions for the changing season:

1. Wear running sleaves. If you feel yourself constantly rolling up your short sleeves or running in tank tops, you’ll appreciate the light running sleeves you can pull out of your pocket when the wind starts whipping. Only a small portion of your shoulder and upper arm will remain exposed to the elements. They can even protect you when it is hot out from UV rays.

2. Headbands. You can cover your ears when you get cold–ears are part of the body that feels cold temperature the quickest–and then pull it back behind your ears when the weather gets warmer and use it to hold back your hair. For men, if you don’t want to look like your wearing a headband when it warms up, you can remove it and wrap it around your wrist–making it look like nothing more than a wristband.

3. Compression socks. Not only do these help with lactic acid build up, they can keep your legs warm for those bothered by running tights. If you feel too hot, roll them right off and stick them in a pocket.

4. Warm-up suits. First to the Finish offers warm-up outfits that you can even do your long runs in if you need, offering both wind and rain resistance. If you warm up, they are easy to get in and out of–simply wear lighter running clothes underneath.

I can’t count how many times people have said to me, “Isn’t running bad for you?” I state that living a sedentary lifestyle is worse (as I generally find the majority of people asking this question are in fact, non-exercisers). However, taking this sport to the extreme can cause harm.

In a recent study out in the Journal of the American College of Cardiology, researchers provide evidence that runners should feel more concerned with heat stroke than running long distances–this is especially of interest as we move into the hottest weeks of the year.

What is heat stroke? It occurs when your core body temperature rises 104 or 105 degrees above the normal, and is associated with dysfunctioning organs.

According to the Israeli researchers, “The diagnosis of heat stroke can be missed and mistaken for a cardiac disorder unless the core temperature– which can only be reliably obtained with a rectal measurement– is taken immediately.”

Additionally, “The risk of heat stroke is not limited to endurance races… [it’s] an important cause of death among high school and college football players, who train and compete wearing heavy protective equipment.”

Although it sounds like 21 out of 137,000 is slim, it’s still a cause for concern. The best combatant to heat stroke is hydration. According to exercise physiologist Jaime Roberts, “The body cools off by sweating, and as long as you remain hydrated, the body is able to cool itself off.”

At least 8 ounces of water shortly before outdoor workouts

A gulp every 15 to 20 minutes during exercise. 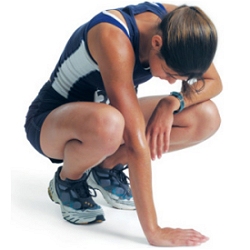 t’s that time of year–when the heat of summer descends upon us. Although it’s not even Memorial Day, where I live the mercury soars and even the mornings feel a little too warm for a good run. But the treadmill doesn’t work for me. I don’t like the feeling of running in place and glancing constantly at the time clicking by on the machine. How do I combat the heat? Here are five ways I cope:

1. I bring a cooler with ice to keep in my car. If I run somewhere away from home (i.e., I drive to the location of my run), I keep a couple of water bottles in a cooler. Although it may hurt to drink something very cold, after a few minutes, it is tepid drinking water. It also feels good to pour a little bit of the cold water over my head to cool myself off and keep my body temperature down.

2. I discovered visors. I cannot stand wearing hats when I run. It makes me very hot, even ones that are made with breathable fabric–kudos to those of you who do! Because of how difficult hats were for me, I had a running coach once recommend a visor–but I thought they were silly looking. I decided to try it and it’s been the best discovery. The heat dissipates from my head because it’s not covered and I get that shade from the brim, which is much more effective than sunglasses.

3. I look for new running routes with shade. In the city where I live, it is very open. I don’t live in a part of the country with woodsy areas where shade is plentiful. But I have learned to discover them. I run the perimeter of parking garages, downtown where the buildings hide the sun and in areas with tall apartment complexes. It’s not ideal, as I’d rather be out in nature. But you do what you need to do to not overheat.

4. I add in crosstraining. Because of my dislike of the dreadmill, I sometimes just cannot run in the summer. It just gets too hot and even dangerous to go outside. I risk heat stroke and dehydration. The summer is a great time for me to take Zumba classes, CrossFit and add in a spinning class here and there.

5. I also keep an extra wicking shirt in the cooler. Halfway through my run, I switch shirts. The new one is ice cold and hits my core, which is the most important part of your body to keep cool.