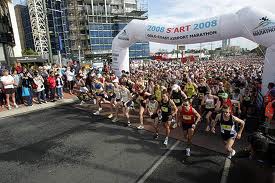 In 2008, I participated in one of my favorite country’s largest races: The Gold Coast Airport Marathon. Held along the coast of Australia north of Sydney, this marathon and half marathon sees more than 20,000 runners each year. Taking place at the beginning of July, wintertime temperatures greet the marathoners. I list a few reasons why you should consider doing this race and start saving your money now.

Time of year: The year I participated, the race fell on the 4th of July. While I felt a little guilty spending the most American of holidays outside of America, it did make for an easier ability to take PTO time as I had that extra paid day off. It generally falls along that same holiday week when a number of Americans go on vacation anyway. 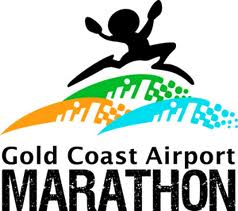 The season: Because Australia’s seasons are reversed, I got to leave the heat of the summer and run in the cold of the winter. This meant rain and some not-so-pleasant racing conditions, but I’ll take that over 100 degree temperatures.

The course: As one of the flattest courses I’ve run, this could make for a nice PR if you are someone who dislikes hills. While you don’t really have any downhills to make up some time, you also don’t have to hill train–just build up the hamstrings and you’ll be just fine.

The part of the country: With views of the ocean, you can experience a post-race relaxation at the beach…or you can head out to nearby Surfer’s Paradise for a chance to participate in any number of adventures. From skydiving, surfing (if the weather permits), to taking a motorcycle up the coast to a colorful night life–this notable area of Australia allows for all sorts of pre- and post-race memories, as long as your legs don’t feel so wonky. Most tourists come for the Sydney Opera House, but doing this race forces you to experience different scenery of Oz.

The culture: Known for their lackadaisical attitude and friendliness, the “no worries” approach to life is found throughout the culture. Americans will enjoy the spirit found among the Aussies during their time Down Under. It’s not a race you simply check off as another marathon, you’ll take away so much more.

My memories of this race will stay with me forever. While all are not happy–I hit a wall at kilometer 25, which is still a long way to go until the finish, I try to forget the pain and just remember the beauty of the course.