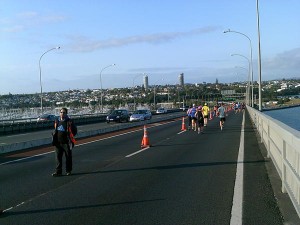 As I type this blog post, I am laying in a hotel room in New Zealand having just finished another marathon. I am in pain (which is slightly an understatement.) The race didn’t go well for me and I ended up with my worst marathon time by approximately an hour. Why? I didn’t train. I completed approximately two long runs to prepare my body for 26.2 miles—obviously not nearly enough. And being a non-athlete, this makes it doubly as difficult. But the race was in a particularly enchanting city with spectacular views of both land and sea. Here are a few of my favorite moments running in the Land Down Under.

Crossing the bridge. One of Auckland’s most famous landmarks is the harbor bridge and luckily for runners, race directors receive permission to shut down two lanes to make it a part of the course. The quads certainly work hard for this portion of the marathon as it climbs approximately one kilometer at a high grade. Fortunately, participants are rewarded for their efforts, as you descend the same distance and overlook the harbor parked full of sailboats and expensive-looking yachts.

Running along the coast. On the back half of the marathon, you run next to the coastline and watch boats circle the calm waters, feel the cool breeze on your sweaty body and pass quaint cafes and restaurants that line the waterfront. To me, I feel something comforting about the water and it’s particularly helpful during a marathon.

The proper people. Spectators clap and not yell. Instead, they rather decisively state, “Well done, mate,” in a reserved tone. The locals running in the marathon were very friendly and cheerful. When I felt so behind and started to cry dry tears, I could hear fellow runners with New Zealand accents come up next to me, tap me on the back and say, “Come on, you’ve got this. Just follow me.” I haven’t done many races where the other runners are just so encouraging. Usually by mile 24, everyone is in such a bad mood. But not New Zealand runners, their upbeat personalities shine through even in the toughest marathon moments.

Taking a ferry.The race started on an island (hence crossing the bridge.) We arose at 4 a.m. to make our way to the ferry boat to sit in quiet solitude with other marathoners and half marathoners for a quick jaunt by boat. 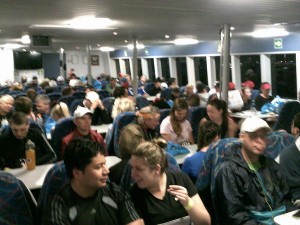 Taking a ferry to the start

The party animals. As I walked to the ferry boat at 4:30 a.m., the bars were still open and the streets were full of those just ending their evening (as mine was beginning.) Our first spectators were night owls coming in from a Saturday night of drinking and dancing. Usually early-morning spectators are spouses of runners wearing lots of warm clothes. This time it was nicely dressed men and women wearing their club outfits.

I recommend a race Down Under. I just wish I had a better finish time.