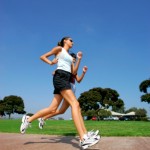 I watched a Netflix documentary this weekend that I found captivating. It’s called Desert Runners and I highly recommend it. It follows four “regular” runners (non-athletes) as they attempt to run through the four deserts of the world in various ultramarathons. I want to watch it again because it really captured what that world is like and the production was unparalleled–not to mention highly motivating at getting me off my couch.

One disturbing element to the documentary was a young girl who was grabbed and nearly assaulted as she ran alone through the Sahara Desert. It made me think of my own safety precautions to take while running, especially as the days start to get shorter.

For those running enthusiasts, however, it doesn’t matter if the sun sets at 10 p.m. or at 5 p.m., they run no matter whether its light or dark. If you are one of these runners, here are a few safety precautions to take in the dark:

1. Bring your cell phone. While we all hate to carry extra weight, the GPS tracking device can assist if you get lost and need to phone for help. One way to combat the weight is to download a playlist program such as Pandora and listen to it while you run. You can skip bringing your iPod and bring the cell instead.

2. While listening to Pandora (or an iPod or radio), try running with one earbud out of your ear. You can then listen for cars and any suspicious noises.

3. Wear reflective gear. Gone are the days of wearing large, heavy construction jackets. Now you can find lightweight reflective material that you’ll not even notice. Wearing blinkers is also a good idea.

4. Stay on the sidewalk. If you can’t find a high school track or somewhere completely devoid of traffic, be sure to stay on the sidewalk instead of running in the street. Depth perception is off at night and you may be closer than you appear to drivers.

5. Change up your route. You never know who is watching. Changing up your route will make you less vulnerable to stalkers.