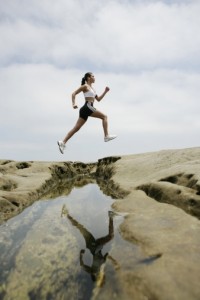 We’re all know running comes with plenty of added benefits: a stronger heart, a fitter body, and tighter, more compact muscles to name a few…but new studies show that working out can also keep your mind working as well.

In a new study reported in PLOS ONE, researchers tracked 88 healthy but “low-fit” participants aged 60 to 78. They were asked to wear tracking devices to monitor their physical activity over the course of a week, as well as submit to brain imaging.

The study used two types of brain imaging: “The first, diffusion tensor imaging, offers insight into the structural integrity of a tissue by revealing how water is diffused in the tissue. The second method looks for age-related changes in white matter, called lesions.”

Results showed that adults who engaged in physical activity showed less white matter brain lesions whereas those who maintained a sedentary week had “lower structural integrity,” which can affect memory and learning.

Is this only true for those of senior age? Think again.

In another study reported by Science Daily, physically fit children have thicker brain white matter than less fit kids. In research conducted at the University of Illinois in Champaign-Urbana and published in the journal Frontiers in Human Neuroscience, the team used diffusion tensor imaging, otherwise known as MRIs to the rest of us non-medical types, to look at five white-matter tracts in the brains of the 24 children aged 9-10 years old.

In addition, the same research team is conducting a five-year randomized, controlled trial on how white-matter brain tract is affected with a physical routine that is maintained over time. Results to come.

Makes me wish I started fitness earlier in life!