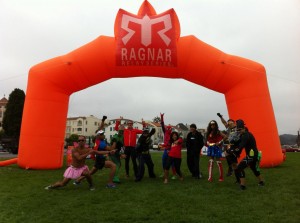 I participated in my first Ragnar race last year and this weekend cheered my mates into the finish line of Ragnar Del Sol in Arizona. While I don’t envy their sleepless night, I felt a little twinge of sadness from not participating in the friendship-making opportunity presented with Ragnar.

Last April, I arose at 4 a.m. to drive to the finish line near Coronado in San Diego to park my car. Our driver then whisked us all away in a van to Huntington Beach for the start. My van had a team of five, but we also had another five people in a separate van. We would all run three legs each for a total of 203 miles down the California coast and into the desert. It lasted from 8 a.m. until 6 p.m. the following day; we ran through the night and in 90+ degree temperatures during the day, followed by a sudden drop of 50+ degrees when the sun slipped away.

My first leg of the Ragnar relay consisted of a five miler starting at Angel Stadium in Anaheim in 90 degrees with terrible humidity. My face turned a bright shade of red and I felt as though it were on fire. I ran/jogged through crowded streets and wove around traffic. Because Ragnar doesn’t close the streets down to traffic like typical races (which makes sense because it lasts all day), I had to stop at the stop lights and stop signs–so my five miles took considerably longer.

My next leg didn’t occur until 12 hours later, which meant a significant amount of downtime with little to do. I brought a book, but it was just too hot and miserable to really enjoy it. But at 1 a.m., I started my second leg of 6.8 miles with freezing temperatures and zero light. I didn’t encounter too many other Ragnar relay participants, so I mostly ran alone with nothing but a few flashing lights to guide me. I traversed through a golf course that offered nothing but total darkness and then I heard a click–a sound I am all too familiar–the sound of sprinklers turning on. Yes, I ran through the sprinklers with not even the light of a moon to guide me. I then turned and ended up running on a trail up a mountain. 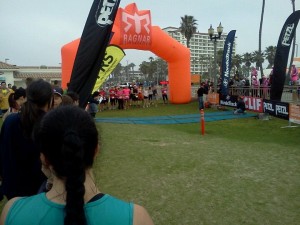 My third leg was my shortest with just 4.4 miles, but it included Torrey Pines hill, famous in San Diego for its significant and fast rise in elevation. I ran as hard as my tired body would let me.

I did make new friends and received my medal. Despite no sleep, I recommend at least trying one Ragnar–it’s pretty mind-boggling the amount of logistics involved. 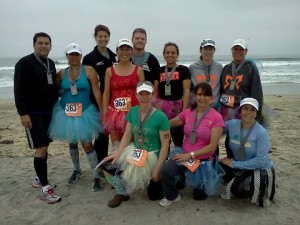