Two years ago I participated in the Copenhagen Marathon, which is still one of my favorite races. Anytime I travel to Europe, I fall in love with its wonders all over again–European chocolates, outdoor cafes, adorable pastries and delicious cuisine. Thankfully, this time in Europe I partook in an opportunity to burn the calories I generally acquired when traveling to this part of the world.

European marathons are quite different from American ones, mainly because they are run primarily by men…and fast men. Out of 10,000 runners, 8,500 were male in the Copenhagen Marathon. This marathon actually has a greater percentage of women than other races in Europe. Spain’s main marathon in Madrid, for example, is 97 percent male. It’s not a bad demographic for a single female, I must admit. One of the positives of European marathons is getting to run with loads of attractive European men. 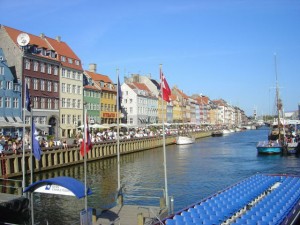 However, the negative is the field is very quick. For a not-quick person such as myself, it’s hard on your mental endurance to end up so far in the back.

This course had a relative out-and-back of sorts for part of it, so I saw the 3:15 marathon group coming toward me (of which I am clearly behind). This pacing group had at least 1,000 runners with it–a massive amount of racers keeping a very fast pace. Because of the sheer power of the marathoners, I actually ran faster than I expected just to keep up with the crowd.

I experienced very unfortunate weather the year I participated. While other years runners get lucky and the Marathon Gods clear the skies, it wasn’t to be for me. At mile nine, the clouds burst and torrential rain poured through the streets. All spectators abandoned the course and numerous ambulances carefully maneuvered through the streets to attend to runners suffering from hypothermia–not exactly ideal racing conditions. I considered the weather that morning and wore a long-sleeved running shirt, but sans gloves. My hands froze and I kept trying to pull the sleeves down over them to warm up; unfortunately my shirt was so wet it didn’t quite work.

During the rain, one of the aid stations offered bananas. The runners tossed the peels right onto the course–runners + banana peels = slipping and sliding. The streets are also quite flat, so the rain really had nowhere to go; we just ran through puddles down the cobblestone streets.

Despite the weather, running through the colorful European neighborhoods and smelling the European bakery treats made this a wonderful running experience.

I’d totally do it again.