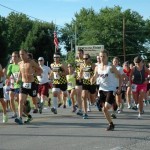 Here is the lowdown of some new research in the fitness world:

In a study published in the February issue of Cell Metabolism, researchers used mice to find how exercise affected them. They found that mice who spent time running on a wheel were able to shrink tumors by 50 percent. High-intensity workouts helped to move cancer-killing cells toward lung, liver or skin tumors put into the mice.

A new study at Southern Methodist University, Dallas, published in the Journal of Applied Physiology found that you actually burn more calories by walking than originally thought. In fact, in 97 percent of the cases looked at by the researchers, walkers burned more calories than predicted.

We’ve all heard that diet is more important than exercise when it comes to losing weight. Maybe not so anymore. Researchers at Loughborough University found exercising is more effective than food restriction in limiting daily calories.

Dr Stensel, a Reader in Exercise Metabolism in Loughborough’s School of Sport, Exercise and Health Sciences, said: “Our findings provide a valuable contribution to the diet and exercise debate. We’ve shown that exercise does not make you hungrier or encourage you to eat more — at least not in the hours immediately following it. Our next step is to see whether this benefit continues beyond the first day of exercise.”

Result: Run if you want to lose weight.

A popular term now is HIIT, standing for high-intensity interval training. It is worth doing. Researchers at Ohio State University found that walking at a varying pace burns up to 20 percent more calories than walking at a steady pace in a study published in Biology Letters. The study also “confirmed the researchers’ prediction that people walk slower when covering shorter distances and increase their pace as distance increases,” according to Science Daily.

Result: Do your speed work and vary between interval and tempo speeds.