Spring is right around the corner–for some anyway, depending on where you are in the country. This means races draw near and you can start looking forward to filling up your weekends with hard-core marathons and those races offering a bit of silliness–such as mud runs.

Not too long ago, I decided to participate in my first event at the original mud run spot—Camp Pendleton near Oceanside, Calif. just north of San Diego. I arrived early in the morning at the military base and watched as thousands taped up their shoes to keep them from falling off. I was unaware that they would, so I too grabbed some tape and wrapped my shoes several times. 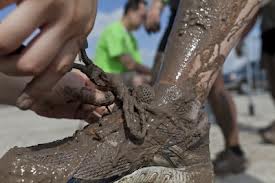 We then took off for a 10K course that had me falling into mud pits, scaling walls (of which I needed the assistance of the military men just to get up—not that I’m complaining), crawling through mud under electric wiring, getting drenched from a firefighter’s hose, running through dirt up and down hills, and jumping into mud pits as if I were five years old.

I ended the race covered in mud. I even had mud on my teeth. Luckily, the race finished with outdoor showers we could all walk through, but I can’t say it got rid of all the mud. I brought a change of clothes, but still had mud all over my body. My shoes were ruined, my socks shrank from all the water and my car was covered in mud after I arrived home, despite sitting on a towel.

If you’re going to be participating in a mud run sometime, I highly suggest going to a thrifty clothing store such as the Salvation Army or Goodwill and purchasing an old T-shirt and shorts and then throwing them in the trash after you’re done. Don’t ruin your good running clothes!

Be prepared to get diiirrrrttttyyy…Really dirty!