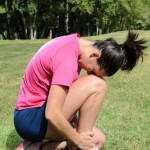 It should go without saying that drinking a caffeinated beverage will keep you up at night. This hurts morning time running–we all know how important sleep is to repairing and restoring your body for optimum performance. However, no research has showed that evening caffeine delays the internal circadian clock, until now.

Researchers at the University of Colorado Boulder and the Medical Research Council’s Laboratory of Molecular Biology in Cambridge, England discovered that evening caffeine delays the circadian clock–the internal clock that tells  when to get ready for sleep and when to prepare to wake up.

The research team showed the “amount of caffeine in a double espresso or its equivalent three hours before bedtime induced a 40-minute phase delay in the roughly 24-hour human biological clock.”

1. Low light and a placebo pill.

2. Low light and the equivalent of a 200-milligram caffeine pill based on the participants’ weight.

3. Bright light and a placebo pill.

4. Bright light and the caffeine pill.

Participants who digested the caffeine pill under low-light conditions had a roughly 40-minute delay in their nightly circadian rhythm compared to those who took the placebo pill under the same conditions.

“This is the first study to show that caffeine, the mostly widely used psychoactive drug in the world, has an influence on the human circadian clock,” said Wright, a professor in CU-Boulder’s Department of Integrative Physiology. “It also provides new and exciting insights into the effects of caffeine on human physiology.”

What does this mean for the runner? With the amount of daylight decreasing, your workouts may be either morning or midday. To keep yourself on track, do not take in caffeine at night and keep off the lights while you are in bed. Keep your computer and phone off once you get into bed and make sure your blinds are shut to keep the bright light out to ensure you are properly rested for your earlier workouts.