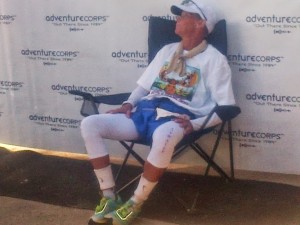 I finished a race yesterday out in the desert. Sweat beaded up on my forehead and I felt thankful I applied at least some sunblock before crossing the start line. Although temperatures aren’t blasting yet all over the country, it will happen sooner than later.

I found a recent study offering a new way for athletes to combat high body temperatures. In Wilderness & Environmental Medicine, heat stroke kills thousands of people and is the leading cause of death among young athletes. Be forewarned: heat stroke kills.

You can prevent heat stroke with proper hydration and limited outside workouts during the hottest parts of the day. Before heat stroke occurs, you can watch for the warning signs for heat exhaustion–its precursor–which include heavy sweating, clammy skin and nausea. If your body temperature reaches 103 degrees Fahrenheit, however, you will be susceptible to heat stroke.

The authors of the study found a way you can ease heat stroke should it occur: apply cold packs to the hands, cheeks and feet. These are three areas of the body in which blood vessels don’t contract when cold packs are applied.

In the study, the researchers had 10 visibly healthy men wear military clothes specially designed to trap heat and then had them walk on a treadmill for 30 to 40 minutes in a room heated to 104 degrees Fahrenheit.

All 10 completed a treadmill test three times, resting at least one day between each trial for recovery purposes. On the first test, they received no treatment for lowering body temperature. The second time researchers gave them cold packs and applied them to the armpits, neck and groin. On the third test, they received cold packs on their hands, cheeks and feet.

After each test, their body temperature was 102.6 degrees Fahrenheit. Here were the results:

Although not a perfect test because the researchers only used healthy, young males, these are significant results. You should be aware of how to help yourself or other runners when faced with symptoms of too much heat.