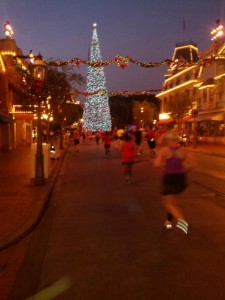 This weekend I participated in another runDisney race and always enjoy the ability to mingle with the Disney characters. This weekend’s festivities included a super heroes theme and I found plenty of men and women dressed in Avengers’ costumes and volunteers also decorated in a mix of colorful Thor and Captain America memorabilia.

Although the winds were a bit strong in this race (up to 65 mph headwinds and blowing over aid stations), I generally adore running through California Adventure Park and Disneyland Resort. Here are a few reasons to consider adding a runDisney race to your 2015 schedule…be sure to add it into your budget, however. They come with a nice hefty registration price (but I think it’s worth it, at least once in your life).

1. Early morning start. Yes, they have to start early to get you out of the park before it opens to the public…However, this means you can be back at your hotel, showered and ready to explore one of the resorts early as well. Plus, you have the race done and over before most people even open their eyes for the day.

2. Plenty of “set-up” camera opportunities. Throughout the park, Disney officials bring in loads of costumed characters complete with race photographers and another Disney employee standing there ready to take a photo with your own camera. If you don’t want to spend the money on photos, it’s easy to take your own. Although photographers dot the course and take much higher-quality photos perfect for keepsakes (and Disney races offer the best keepsake photos).

3. The memorabilia available, from princess tiaras to wear while you run to the best medals in the running biz, you’ll bring home plenty of racing loot.