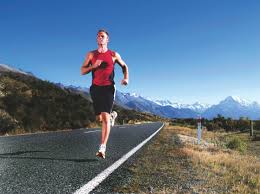 I finished my first race of 2015, traveling out of state for it. I realized I forgot my compression socks at home and for the first race in years, ran without them. I’m quite sore  and discovered this new study today that makes me even more upset I left my socks at home.

Research participants ran on a treadmill until they reached exhaustion two weeks before running a marathon and again two weeks after the race. A total of 33 runners finished the study. (The study started with 49, but those 16 dropped out it is assumed because they didn’t want to run that hard before a race when they were in tapering mode.)